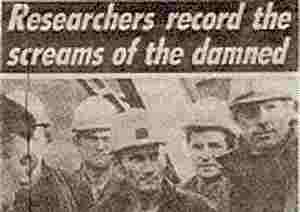 I’ve had several conversations with atheists and agnostics regarding the existence of the God of the Bible. After all is said and very little done, their objections almost always come down to disbelief in a character who would create moral beings knowing they would sin and then cause them to suffer eternally for sinning. They say something like, “If such a being exists, he doesn’t deserve my allegiance let alone my love.” I have to admit they have a point.

That being said, I am a believer in the God of the Bible.  I will never apologize for the Being presented within the pages of Scripture.  I will in no way minimize his severity or avoid a discussion of his judgments.  I’m “all in” with God as revealed in holy writ.  Any other god does not deserve my allegiance let alone my love.

So, what are we to do with the doctrine of Hell?  Many Christian thinkers have struggled with this question.  C.S. Lewis expressed in his book, The Great Divorce, the belief that those in Hell lived in an environment which reflected the misery of their choosing and could at any time choose Heaven.  More recently Rob Bell mused in Love Wins that it’s likely that every created being will at some point accept the supremacy of Christ and be welcomed into the kingdom of God.  I understand the motivation behind these ideas but scriptural support for them is thin at best.  We mustn’t allow our personal disdain for a doctrine to push us into forging new ones.  For this reason, I disagree with these two men whom I otherwise respect.  The Bible teaches that Hell is a real place prepared for Satan and his angels and that those who fall under God’s wrath will be sent there as final judgment.  I do not, however, believe that God will cause anyone to suffer eternally.  I am under this conviction because that’s what I understand the Bible to teach.

In Matthew 10:28, after predicting that his followers would suffer persecution to the point of execution, he cautions, “Do not be afraid of those who kill the body but cannot kill the soul.  Rather, be afraid of the One who can destroy both soul and body in hell.” (Emphasis mine NAW)  The word translated, “hell” is gehenna which referred to the Hinnom Valley just outside of Jerusalem.  Gehenna was used as a garbage dump where trash was burned.  Jesus warned that God was not only able to destroy the body but also the soul in his celestial garbage dump, Hell.  Hell is not a place of eternal torture but an incinerator for the destruction of sin-spoiled souls.

Someone might protest, “But what about all those places in the New Testament which describe Hell as eternal?”  Good question.  Let’s look at a case in point.  Mark 9:47-48 says,

“And if your eye causes you to stumble, pluck it out. It is better for you to enter the kingdom of God with one eye than to have two eyes and be thrown into hell,where

“As the new heavens and the new earth that I make will endure before me,” declares the Lord, “so will your name and descendants endure.  From one New Moon to another and from one Sabbath to another, all mankind will come and bow down before me,” says the Lord.  “And they will go out and look on the dead bodies of those who rebelled against me; the worms that eat them will not die, the fire that burns them will not be quenched, and they will be loathsome to all mankind.” (NIV 2011)

So let me ask the question: Is this passage describing conscious people eternally suffering?

Jesus will return to judge all people who’ve ever lived.  Some will live forever in a new heavens and new earth.  Others will be cast into Hell where they will be completely destroyed as the Bible teaches.  So, pertaining to God’s justice, has he not the right to destroy what he has created?

I have much more I could say about this doctrine and what the Bible says about it it but I’ve got other things to do right now.  Maybe later.  For an exhaustive treatment of this topic, I suggest reading The Fire that Consumes by Edward Fudge.