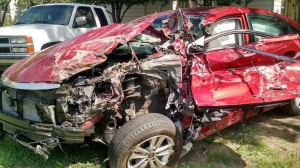 Okay, I’ll admit it – I think the world is running out of time. No, I don’t buy into any specific end times predictions but I do think the global situation trending toward a cataclysm of some kind in the not-too-distant future. I don’t say this with a sense of dread but with anticipation because I have hope in the Living One who will still bring about the restoration of all things.

I suppose I would dread what is coming if I liked the way things are, but I’ve seen too much for that. I left my Christian bubble several years ago and have seen the utter degradation of our collective soul in the lives of so many living week to week in hotels or sleeping on picnic tables in parks. I’ve had to learn that refusing to allow these walking dead to feed on me or the church is often the best thing I can do for them.

As each encounter with parasitic humanity has pained the fleshy heart which Christ has placed within me, I’ve been tempted to flee the pain through hardening. I can’t do that, though, because that would further spread the rampant spoilage covering our world. Jesus predicted about the time preceding his return:

And because lawlessness will be increased, the love of many will grow cold.  But the one who endures to the end will be saved. (Matthew 24:12-13 NIV)

In times like these, we can no longer count on the many to love. Asking 100 people to each give $20 won’t work because most of those people have grown too cold of heart to even part with $20 or to even notice the need of another person. In these last days, it will be up to the few who endure being exploited and solicited for the sake of love. The few will have to shoulder the load for the many. And shoulder the load they must for their very souls are at stake. How can they be worthy of the kingdom who will not share in the sacrificial love of Christ? Yes, it is the few because Jesus, our Lord has said, “Many are called but few are chosen.”

So, what is the difference between the many and the few? Simply this: The many see giving as an unwanted obligation. The few see giving as a joyful opportunity.

I’m not saying we should enable the exponentially expanding mass of users around us. I’m saying that when a real need arises (and those almost always require sacrificial giving), we should rejoice in the chance to truly live out the pure gospel of Christ for God’s glory.

I have a friend who recently was in a bad car wreck with this family. His wife sustained massive injuries but thanks to God’s grace she is recovering steadily. The other driver had no insurance and no income, so my friend’s insurance will have to offset their costs which have reached over a quarter of a million dollars so far. They also face the loss of the wife’s wages during her months of hospitalization and rehab. I’ve been working to raise money for my friend. Our church gave generously to him but that amount will evaporate like water in a hot pan. He will need much more than charity. He will need love.

When I gave him the check from the church, he told me how hard accepting help is for him. I told him, “Man, this is what the church is about. You aren’t in need because you are lazy or irresponsible. This is something that no one could have foreseen that happened to you. This is a real need and I’m like, ‘Finally!'”

If you’d like to join the few who will help with a real need, you can do so by following this link.