I’m in an online group that’s reading chronologically through the Bible in a year. In today’s reading from 1 Samuel, Israel having suffered a defeat at the hands of their nemesis, the Philistines, brings in the big guns by sending for the ark of God to go before them into battle.

Rather than giving them the edge they hoped for, the ark itself got taken by the Philistines as spoils of war. To add insult to injury, they place it in the temple of Dagon, their god.

The next morning, the Philistines find Dagon face down in front of the ark. The next day, the same thing except this time Dagon’s and head were broken off. Dagon isn’t the only one to suffer from the presence of the ark. We’re told that the Lord’s hand was heavy on Philistines until they sent it back to Israel.

I’m also reading another book called Grace and Personality by John Oman. In discussing the order of the first three requests of the the Lord’s Prayer (God’s name to be hallowed, his kingdom to come, and for his will to be done), he has this to say,

How often is that order reversed! Let us do Thy will, that Thy Kingdom may be gradually brought in, and, in the end, every heart be inspired by the true reverence! The result is striving and crying, with the perpetual menace of defeat and the increasing shadow of despair. But the servant of the Lord should not strive, nor be, after that fashion, morally strenuous. An essentially apocalyptic hope, a dependence, not on man who runs, but on God who gives the victory, dominates this prayer as it does all our Lord’s teaching; and the ground of it lies in beginning with our relation to God, and, only through it, passing to man’s achievement. The order is first reverence, then surrender, then obedience, yet always one and indivisible, even when successive in their manifestation.

We don’t need to defend God. We need to worship him and surrender personally to his will. Efforts to “defend family values” undermine the faith of the gospel. Conceptually, they represent a god no more powerful than the one for whom the jihadis riot. 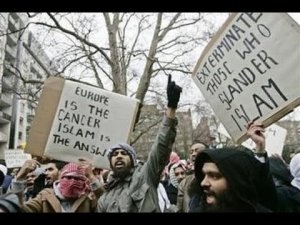