I’ll confess that I’ve struggled to write this series. I almost feel like one of those people who critique Mother Teresa for not doing more community development. Even if God didn’t exactly mean for us to mimic the details of Jesus’ life, surely aspiring to be more like Jesus can’t be a bad thing.

I’ve only seen it yield bitter fruit in my life. At the beginning of this series, I shared some about my struggles to live up to Jesus’ lifestyle.  In the shambles of my failure, I began to pursue a different vision of following Christ. Yes, I entertained the notion of giving up altogether, but where could I go? He has the words of life.¹ I went back to the Epistles and committed to obeying this passage:

Slaves, obey your earthly masters in everything; and do it, not only when their eye is on you and to curry their favor, but with sincerity of heart and reverence for the Lord. Whatever you do, work at it with all your heart, as working for the Lord, not for human masters, since you know that you will receive an inheritance from the Lord as a reward. It is the Lord Christ you are serving. Anyone who does wrong will be repaid for their wrongs, and there is no favoritism. (Colossians 3:22-25 NIV)

Paul wrote those instructions to slaves, but the first century CE didn’t have “employees,” so I made it work.

I still remember the sublime joy of lifting, sorting, loading, and delivering for Jesus. I discovered the paradox of resting at work. While everyone around me cussed and fussed, I smiled. 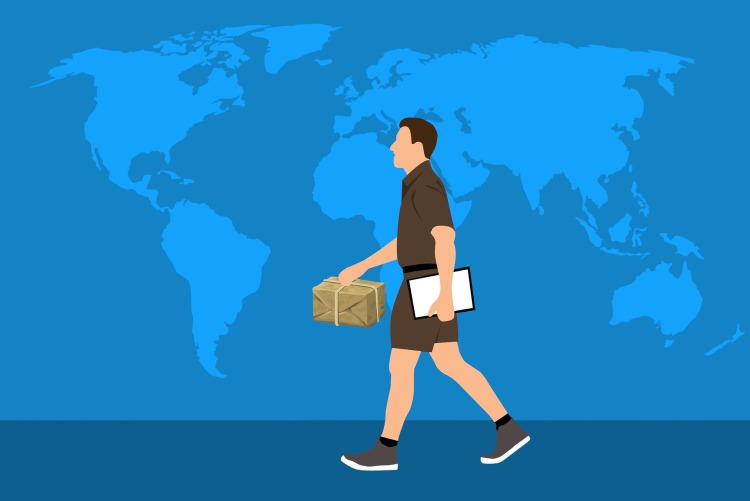 One time, a coworker named Jeremy threw down a box he was holding and came storming up the belt to where I was standing in a heap which had flowed into my area from a recent “slam.”

“Nate!” he yelled, nearly apoplectic, “Is it because you’re a Christian; is that why you’re so happy here?”

That was the reason. I had learned to express the life of Christ as a UPS worker. I didn’t need God to get me out of there to find joy or meaning. I only needed to find him within my circumstances.

I would be lying if I said that I never again struggled with dissatisfaction at my work, but at least I knew that the problem wasn’t with my circumstances.

One of the great difficulties with maintaining a Christlike posture in a secular profession for me was the lack of role models. Francis of Assisi, George Muller, Watchman Nee, and Dorothy Day were among my “dead mentors.” I read their biographies and watched movies about their lives. I aspired to walk in their footsteps as they certainly walked in Christ’s. Everyone one of them looked a whole lot more like the portrait of Jesus from the Gospels than anyone I knew and all of them worked full-time serving the poor and preaching the word. My aspirations to live as they did were about a ridiculous as a 5’6” overweight mathlete emulating LeBron James.

Then, I found him – a dead mentor who walked a different path. Actually, he walked the same path, but with a different gate.

George Washington Carver pursued his calling with peanuts rather than preaching, science rather than spiritual disciplines. Born a slave and raised by a white couple, George encountered his “Mr. Creator” through nature in the forest and farm of his southern Missouri home. Eventually, his faith and curiosity would lead him to obtain two degrees in botany and position as a professor at the Tuskegee Institute in Alabama. There, he saw the vulnerability of black sharecroppers who were starving on ten acres of land too depleted by cotton to produce food. Mr. Carver discovered that peanuts could not only grow in the depleted soil but could restore nitrogen into it. He encouraged the sharecroppers to plant them instead of cotton.

When harvest came, they found no market for their goods. Thousands of bushels of peanuts sat unwanted, rotting in warehouses. Now, the farmers had neither subsistence crops nor even the meager proceeds from cotton.

George went into his lab with a bushel of peanuts and requested that he not be disturbed. Over the next three days, he discovered over three hundred commercial uses for the peanut including household items, plastics, and, yes, peanut butter.

At a speech given to the YMCA in North Carolina, Carver reflected on how he came to make these discoveries:

Years ago I went into my laboratory and said, “Dear Mr. Creator, please tell me what the universe was made for?”

The Great Creator answered, “You want to know too much for that little mind of yours. Ask for something more your size, little man.”

Then I asked. “Please, Mr. Creator, tell me what man was made for.”

Again the Great Creator replied, “You are still asking too much. Cut down on the extent and improve the intent.”

So then I asked, “Please, Mr. Creator, will you tell me why the peanut was made?”

“That’s better, but even then it’s infinite. What do you want to know about the peanut?”

“Mr. Creator, can I make milk out of the peanut?”

“What kind of milk do you want? Good Jersey milk or just plain boarding house milk?”

And then the Great Creator taught me how to take the peanut apart and put it together again. And out of the process have come forth all these products!²

G.K. Chesterton once said that with God white and red stand together in perfect harmony with an abhorrence for pink. He meant that seemingly opposing concepts which we struggle to reconcile through compromise agree perfectly before God with no need to minimize either. Where the “third way” solves contradictions, there we find the fingerprint of God.

That fingerprint covered the life of George Washington Carver.

Consider the conflicts of the twentieth century:

In St. John the 8th chapter and 32nd verse, we have this remarkable statement:

And ye shall know the truth and the truth shall make you free. Were I permitted to paraphrase it, I would put it thus: And you shall know science and science shall set you free, because science is truth.

There is nothing more assuring than, more inspiring, or more literally true than the above passages from Holy Writ.

We get closer to God as we get more intimately and understandingly acquainted with the things he has created. I know of nothing more inspiring than that of making discoveries for oneself.³’

Just as Christ came to preach peace to those who were near and to those who were far, so George Washington Carver announced that same peace to the industrialist and the ecologist, to black and white, to the scientist and the theologian. These words of dedicating the Roosevelt Medal to Mr. Carver beautifully summarize the divine purpose which he fulfilled:

To a scientist humbly seeking the guidance of God and a liberator to men of the white race as well as the black.4

God obviously expressed himself through George Washington Carver, but that expression was distinct in detail from Jesus and from other heroes of the faith. While Christ experienced a dramatic call into ministry at the waters of baptism, Carver followed a circuitous route that required years of preparation. Jesus traveled and taught itinerantly, but Carver remained at the Tuskegee Institute throughout his career. Jesus spent forty days fasting and long hours in prayer. In contrast, George prayed aloud very little remaining rather in a posture of silent prayer throughout the day. Jesus pointed people away from a preoccupation with earthly provisions, while George made them his primary mission. Jesus was executed in the prime of life, George died peacefully as an old man well regarded by all.

George Washington Carver didn’t live by WWJD, but he embodied the spirit of Christ as well as anyone I’m aware of. When wronged and mistreated, he chose to forgive. He lived in constant, grateful communion with God. He gave full credit to God for every good thing he did. He mentored small groups of men to carry on his work and expand his impact. He devoted himself to the betterment of humanity. He chose his calling over the allure of riches or prestige. He even spent long hours healing wheelchair-bound people.5 He didn’t mimic Christ; he imbibed him and so became a son of God expressing the Father according to his own unique constitution.

I needed Mr. Carver in my disillusioned days. The National Monument established in his honor sits just an hour to the north of my home. After a visit there, my wife and I decided to name our second son, Jadon Carver, after him. I want my children to know that they can follow Jesus as he calls them and not according to any template, even one found in the Bible.

I also want them to know that God wants to be found and worshiped outside of formal religious contexts as well as within. I believe that George received a great blessing by being denied entry into the church because of his race. Forced to resort to the open-air cathedral of the forest, he found unbroken fellowship with God who won’t be confined to “sacred space” and for whom all space is sacred. To Jack Boyd, a YMCA official, Carver wrote about his Tuskegee students:

I want them to find Jesus, and make Him a daily, hourly, and momently part of themselves.

O how I want them to get the fullest measure of happiness and success out of life. I want them to see the Great Creator in the smallest and apparently the most insignificant things about them.

How I long for each one to walk and talk with the Great Creator through the things he has created.

My beloved friend, keep your hand in that of the Master, walk daily by His side, so that you may lead others into the realms of true happiness, where a religion of hate (which poisons both body and soul) will be unknown, having in its place the “Golden Rule” way, which is the “Jesus Way” of life, will reign supreme.6

If we really want the “Jesus Way” of life, we’ll need to hold open the breach which Christ tore between sacred and secular. We must learn to express in our ordinary lives the Spirit of love by the faith which comes through the gospel. We’ll need to stop “going to worship,” so we can start worshiping. I’ll share more about that in my next series, “Stop Going to Worship.”